I have no idea what this movie is about but Harry looks cute/hot af.

The Veronicas' self titled third album is out November 21. You can pre-order on iTunes now.

I wrote 'Line of Fire' crushing on someone who already had a GF. But I couldn't stop my feelings for them/ or pretend we didn't both feel it 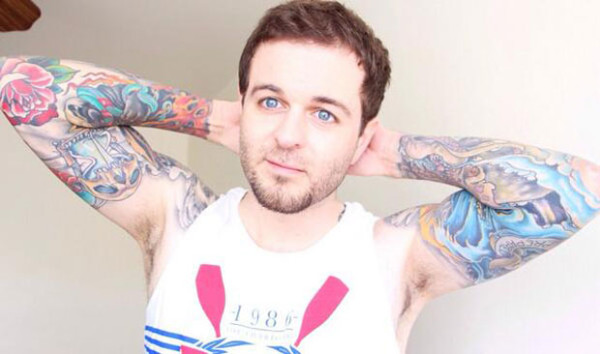 Rainn Wilson wrote on his fb: After much consideration, the decision was made with Curtis Lepore to mutually part ways on SoulPancake's television project featuring Vine stars. We felt this was the best decision for everyone involved. We wish Curtis all the best in all his future endeavors.

source: rumorfix - rewritten by me (previously wrote he plead guilty to rape charges, which was wrong. the charges were dropped for a plea deal) Andrew Garfield at 'Theory of Everything' NYC Screening with Eddie Redmayne Source.
That color doesn't do her any good.

Hmm, is BadGalAri not that bad gal after all?


The Honeymoon Avenue chanteuse wasn't able to bless lesser beings with her light, when she failed to show up at a scheduled appearance for a charity event in New York, according to some shady source who tipped NY Daily News.

Pencils of Promise, a nonprofit charity organization, held its annual gala at Cipriani Wall St., with all their proceeds going to help provide education to impoverished kids in developing nations worldwide. BadGalAri is one of the celebs exclusively invited for this event.

“Everybody got there and was waiting for her to arrive and she was also supposed to be a surprise musical guest,” one guest tells us. “No one was told she wasn’t coming, when I overheard organizers say she’s not coming, she doesn’t want to come. She’s afraid of flying because of Ebola.’”

Ari's no-show comes after a panic in NYC is happening, due to a doctor who apparently traveled around the city before the symptoms manifested on him. Apparently, our BadGal is afraid to contract the virus at a charity event in Manhattan.

It is unclear on where did Ari go on the night of the event, since there's no Instagram or Twitter update from her. However, a grown-ass man, fuckboy, and enabler named Scooter Braun, who manages her career, attended the event.


READ MORE at the source + rewording by

Are you afraid of Ebola, ONTD? By now we know Mama June is fucking a paedophile that abused her daughter, BUT THERE'S EVEN MORE TO IT

Court documents on Anna's case (obtained by Radar) say “did then and there unlawfully perform an immoral and indecent act which did involve an act of sodomy to Anna Shannon with intent to arouse and satisfy the sexual desires of said accused and said act involving the mouth of said Anna Shannon and the sex organ of the accused,” The abuse occurred multiple times between October 2002 and March 2003.

Still, Anna's case was dismissed, so this piece of shit was later convicted on aggravated child molestation charges IN ANOTHER FUCKING CASE in nearby Spalding County.

Paraphrasing the Cinema Blend review, it's fun with the potential to be quite good and the weakest link was Lucy Griffiths as Liv because they gave her little else to do but freak out and be a repository for exposition. It's also very much in the vein of Angel (noir inspiration in tone, damned lead working toward potential salvation, demons and shit) and Supernatural (angels and shit, criss-crossing the US, exorcisms on the reg). Also, Harold Perrineau as Manny the angel was rather delightful after not seeing him in much of anything mainstream since Baz's Romeo + Juliet.

Source 1&source 2 with some of my own tweaking.

source: my eyes and preserve.us

It is a pleasure to open the Information Age exhibition today at the @ScienceMuseum and I hope people will enjoy visiting. Elizabeth R.


This was at an event for the Science Museum in London.
Confirmation that she tweeted it here and here
Video of her tweeting

Stephen Hawking 20 hrs ·
I have always wondered what makes the universe exist. Time and space may forever be a mystery, but that has not stopped my pursuit. Our connections to one another have grown infinitely and now that I have the chance, I’m eager to share this journey with you. Be curious, I know I will forever be.
Welcome, and thank you for visiting my Facebook Page. -SH Naomi has worn numerous getups and put on assorted guises. Nevertheless there is negative disagreeing the statement that Naomi Campbell rotated skulls when this woman rolled ahead in a desi avatar to unveiling Charlotte Olympia's greenest assortment of purses. The exquisite model, who displayed the Indian ensemble in 2009 when she frolicked down the slope for Lakme Fashion Week, pinched the demonstration when she selected for this shadowy tie sari embroidered with a reddish rim.

Hard-working artists would sure be glad to welcome December, with early gifts coming in the form of award nominations, as the list of nominees for the 2015 Grammy Awards is will be revealed on the morning of December 5, except for one top category: the Album of the Year.

In a new and not-so exciting twist, the Recording Academy will announce the nominees for AoTY later that night when they'll air their TV special, "A Very GRAMMY Christmas", airing on CBS at 9 p.m. EST.

It will be hosted by LL Cool J, and featuring performances by Moron 5, Tim McGraw, and soon to be announced acts, according to producer Ken Ehrlich in a statement last Thursday.The AoTY nominees will be revealed at the end of the one-hour special.

THE BadGalAri, Pharrell, and other acts will perform much-loved holiday standards, and their own hit songs. All performers are said to be Grammy winners, except our future Grammy queen THE BadGalAri, who rose to fame with her record-breaking singles this year, like Problem, Break Free, and Bang Bang (aka the Lady Marmalade of this generation, LBR).

READ MORE at the source + rewording by me.

Do you think Ari will get a Grammy, ONTD?

On Leonardo DiCaprio "stealing" his role in The Beach: "It was an unfortunate situation, and it wasn't handled well. I was very upset. But time has gone by, and we put to bed the bad feelings and all of that shit."

On doing movies for money: "There have been films I've done where I've been very happy to have reached my last day on set, but not many. And I've never started a film with anything other than enthusiasm."

On partying hard: "I did party very hard. I used to like it. Because of Trainspotting and Shallow Grave, I was very well-known in Britain, where I lived then. At the end of the millennium, I was meeting people who had an idea of who I was before I even talked to them. I would recognize this look on their face as they were seeing if they were right or wrong about me. It makes you feel very lonely. I partied hard, wherever I was, whenever I was. It wasn't Star Wars' fault."

On his opinion about Star Wars fans and The Phantom Menace: "I don't have any experience with them. I've never been to one of the conventions. The people I meet are the fuckers who want me to sign Star Wars photos so they can sell them on the Internet or the people at premieres who are crushing children against barriers to get me to sign their fucking picture of Obi-Wan Kenobi. They're not fans—they're parasitical lowlifes and fucking wankers. I watched it once, at the premiere(The Phantom Menace), so I'm not in a good position to judge. They had a tall order, the three films I did. The fans waited so long and wanted to feel like they did when they watched the first film, but they were grown-ups by that time. I don't mind the criticism. I've heard it to my face.

T.I.'s wife Tiny gets Brightocular procedure to permanently change her eye color from brown to grey, says doctor made her dream come true. How long 'til she goes blind? The 31-year-old actor recently opened up about why he doesn’t talk about their relationship.
“I understand why people are interested in the personal lives of people who are in public more than those that aren’t. I do understand that,” Andrew told E! News. “I have a deep understanding of that. Just for me, it’s not something that I…I don’t want it in my life, so I do everything I can to deflect it and say no to it, because I think people forget that, ‘Oh, this is my life, and this is your life, and that’s your life.’”
Andrew continued, “Sometimes then you just have to disappoint people and say, ‘Well, no. No thank you. Thank you for asking and thank you for your interest and no.’”

You are the best thing that's ever been mine. @taylorswift13 you're a genius


According to the Guardiar's Alexis Petridis, TS is 'leagues ahead' of her pop competition, here's why:

- Despite being produced by Shellback, Martin and Ryan Tedder, the sound of 1989 is Taylor's own unlike many of the other artists they work with
- One of the things that sets Swift's venture into pop apart from her peers is the content of her songs - she doesn't sing about her wealth, getting into VIP clubs or other 'meaningless aspirations', she still keeps the music focused on singing about ~real life, relatable emotions in a 'Springsteenesque' way
- “The drought was the very worst,” line from Clean is praised, author says he couldn't see any of Swifts peers coming up with
anything like it either because they can't be bothered or they because they just can't, depending on the artist
- Finishes to say her work on 1989 is the reason why she deserves the sort of respect that is commonly denied to her competitors/artists in her genre

@taylorswift13 is a pretty cool chick. Loved this interview in @Esquiremag#allwomenshouldreadEsquirepic.twitter.com/TuohVRFJu6

Dean McDermott isn't proud to be called a "monster" for cheating on Tori Spelling, and like a white girl, he just can't even.

This fucker opened up to ET Canada about the issue, and proudly claiming that he is "not the first person to cheat on this wife." He continues being obtuse and insists that he's just human. "I'm like, 'No, I'm not a monster, I'm a human being and I messed up,'" he said to ET Canada.

“I’m owning up to it and I’m getting help,” he added. “But to label me a monster or evil is very hurtful.”

"The affair was more about how I was feeling about myself than having an affair."

In an Instagram post, Tori blasted him about not being in her side now that she's hospitalized from "bronchitis, sinusitis, and pneumonia" since October 18.

In a statement to RadarOnline, a childhood friend of this fucker excused this bullshit as caused by Dean's emotional issues from childhood.

“What people do, they’re doing things for a reason,” his friend said in an interview. “Whether because of your marriage or other issues that push you to do things.”