- They show a clip of Sam yelling. Robert says he's never seen that clip before. Bitch that's a lie, you were right in front of them!. He says Sam is a deeply troubled individual with psych issues.
- Boring and beautiful Eric says Logo actually cut a lot of drama.
- Robert mentions 'people trying to call him out' but it was actually 'they who were doing naughty stuff in the house'. Probably referring to Chad who outed his fake businesses and that he's still a ho. Also, Chad hooked up with Sam in the house.
- He basically said he's not with Eric anymore but they'll 'always have a bond because of the show'.


- Starts at 10:30c/11:30est
- A Tribe Called Quest is the musical guest.
- If you'd like screencaps or gifs, this tumblr will be posting them as the show airs.

Josh Hutcherson participates in the Trump protests in LA.

come join in a peaceful march through downtown LA to show the world how many of us feel! #notmypresident

UNITED WE STAND DEVIDED WE FALL!#peacefulprotest#notmypresidentpic.twitter.com/AtgAEQcep6


can we just discuss that precious josh hutcherson was out protesting in downtown LA last night yelling, "her body, her choice"

---
SE recently released a Japan-exclusive demo for Final Fantasy XV, titled Judgment (You can access this demo easily if you have a JP PSN account, there are tutorials on youtube to help you if you're curious to make one!). The trailer above was the secret reward given to players for completing the demo =) I tried the demo myself and have been enjoying it so far, but don't want to do too much as I'm saving most of my experience with it for the actual release on Nov. 29th (finally...)

Anyone else give it a go? It looks so beautiful on the PS4 Pro. For those curious, here is a thread showcasing the differences in the two quality modes available on the Pro : Final Fantasy XV Judgment Disc Demo Has PS4 Pro Enhancements @ 1080p

Summary from YT:
When the most-decorated athlete on Earth heads to space there’s only one thing standing between him and victory – his irreverent, trigger-happy teammate who not only steals his kill but teaches him a lesson on how to lose.

Summary from YT:
After a simultaneous surprise attack on UNSA forces in Geneva and the Moon Port Gateway, Lt. Nick Reyes must take the helm of the Retribution, one of Earth’s last remaining warships. In a time of unthinkable adversity, Reyes must lead his trusted crew against the relentless Settlement Defense Front’s plans to dominate all who oppose them. The freedom of every citizen of Earth is at stake. Take command on November 4th in Infinite Warfare’s campaign.

I haven't played CoD in years. Might take it up again now.

*The Governors Awards are honorary Oscars given out by AMPAS, the awards body behind the Oscars. Going to them is a good way to schmooze with AMPAS members and hustle for votes.

Yas at this shade by superior Jimmy 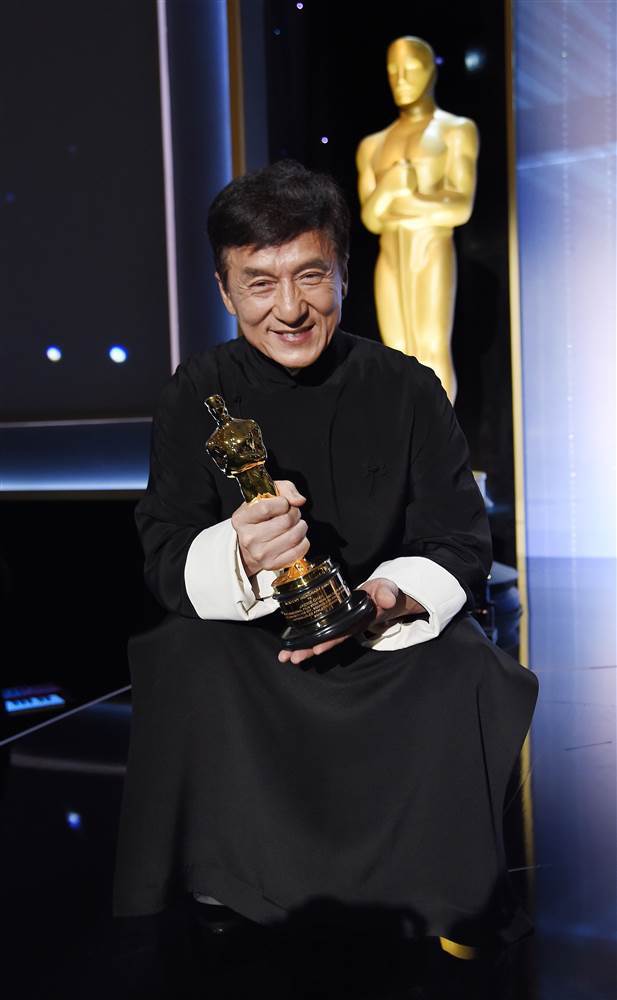 "After 56 years in the film industry, making more than 200 films, after so many bones, finally," Chan said. He praised his hometown Hong Kong for making him "proud to be Chinese," and thanked his fans, saying they were the reason "I continue to make movies, jumping through windows, kicking and punching, breaking my bones."

What outfit do you find iconic?

Paul Feig gets set to direct a science fiction comedy about a female engineer and her robot clone: https://t.co/c1HffMbGPzpic.twitter.com/miaS48Lor6

'Turned On' will explore the funny side of humanity's relationship with artificial intelligence by following a socially awkward female engineer who creates an android version of herself to be her stand in, but things go wrong when the droid starts to become self-aware.


November 13th marked the 1-year anniversary of the terrorist attack in Paris.

'Eagles of Death Metal' manager says two members of the band, including frontman Jesse Hughes, were denied entry @ Bataclan. The venue’s co-director Jules Frutos said he threw them out, and that 'there are things you can’t forgive'.

The band's frontman was heavily criticized for his reaction to the 2015 attacks because of his anti-Muslim comments, he criticized France's strict gun control policies, and also suggested that the Bataclan security was in on the attacks.

Highlights from the video:


* Mary's been resurrected and sent on a suicide mission to use the ability she has as the boy's physical mother to destroy the body that he's in. She ends up failing the final test and looks like she'll be getting her plan B, which is a swift return to the grave.

* Isaac's story is almost like a pre-colonial procedural crime show, "Isaac investigates". Isaac is a bit of a dog with a bone, despite being repeatedly told to let it go. Little does he know it's a crime that leads to the doorstep of Mercy, whom he desperately wants to find and get at.

* Mercy took over the ramshackle brothel and has really changed it and is running it her own way. There's a bit of chemistry between her and Hathorne, it's the beginning of a very interesting relationship between two very unexpected characters.

Is the Double Dutchess still happening? Not even Fergie knows, probably.

Did you know Kamala Khan has a Funko pop now? And it's a Walgreens exclusive and it's not easy to find? @GailSimonepic.twitter.com/KSD9wLkMxg


Kamala Khan, the new Ms. Marvel, has gotten her first Funko Pop, but some fans are unhappy that such a popular character is a Walgreens exclusive because it can be difficult finding them at their stores and "flippers" are selling them online at higher prices.

Angelina Jolie Breaks Her Silence on the Divorce https://t.co/tZDAKSHQSw

Actually her spokesperson did it for her:

"The job of the DCFS is to make sure the children are in a safe and secure situation. As we said earlier this week, childcare professionals encouraged a legal agreement accepted and signed by both sides that was in the best interest of the children. Angelina said from the beginning that she felt she had to take action for the health of the family and is relieved that after their 8-week involvement, the DCFS is now satisfied the safeguards are put in place that will allow the children to heal."

#Supergirl: Alex Coming Out Leads to a Sisterly Misunderstanding, and Then a Bond as 'Unbreakable' as Ever https://t.co/A3PY4D3fPc

I guess now that #Arrow has officially released the info.
I can confirm YES Katie Cassidy is back...as Black Siren, NOT Black Canary.


-Black Siren will be around for 2 episodes
-A new Black Canary has been found, most likely Tina played by Juliana Harkavy If you want to read his full statement, here it is

Why I created WE BARE BEARS. pic.twitter.com/EqnXWfQhzr

o my lord. Kween of christmas, kween of festivity. This show starts on Dec 5th